She was the runt of the litter.  The first time I saw her I fell in love.  We got her from a man in Knoxville who raised Basset Hounds.  Being the runt she was smaller than her brothers and sisters and I didn’t know it then but we were in for a world of health issues. 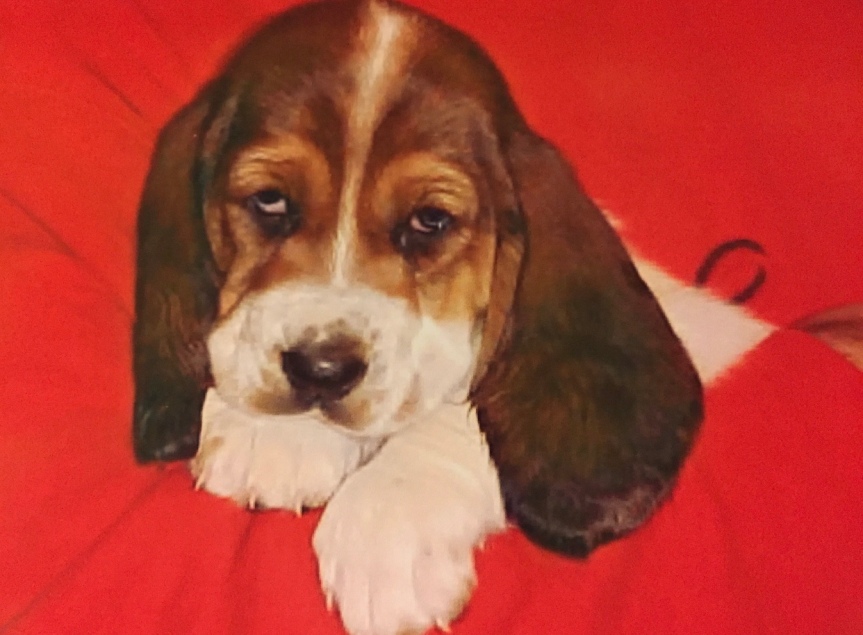 It was the fall of 2004.  The hubs and I hadn’t had an inside fur baby for several years.  I will have to admit it had been sort of nice knowing that when we went out of town we didn’t have to worry about having someone stay at the house or board our babies.  My father in law who lived next door to us would just come over and feed our outside girl and make sure she was o.k. and put her in the garage at night. But I missed having a dog in the house. I missed the snuggles and the attention given to a fur baby.

I always wanted a Basset Hound, so we found someone in Knoxville who had a litter that would be available in a couple of weeks.  She was multi colored and as I said the runt of the litter.  We didn’t know that until we picked her up.  She was only five weeks old and technically too young to be leaving her mama.  The breeder told us she was six weeks old but when we got the paper work on her and saw her birthdate we realized she was just five weeks old.  We took her anyway.  I felt like at this point I just couldn’t leave her behind.  I bonded with her the minute I looked into those big brown eyes. 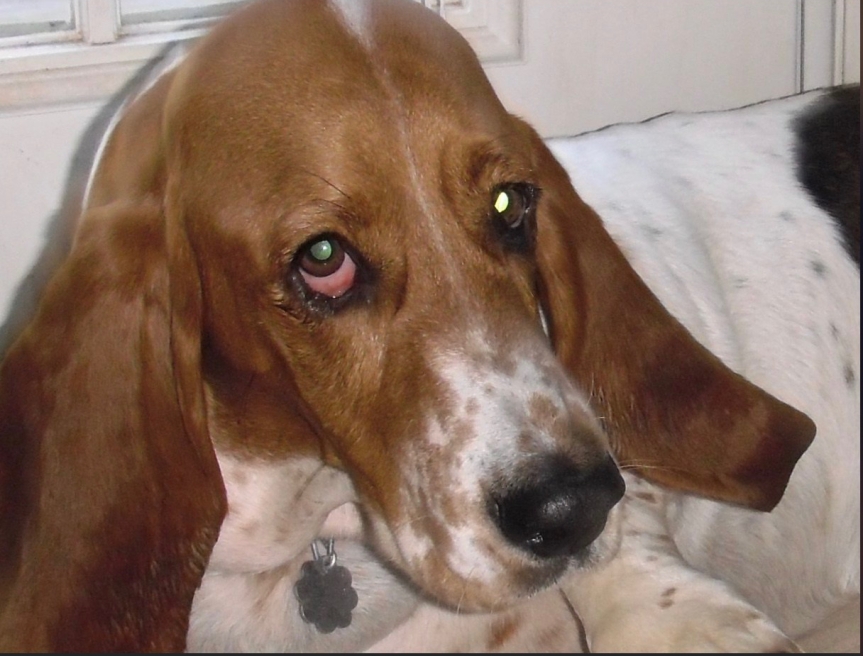 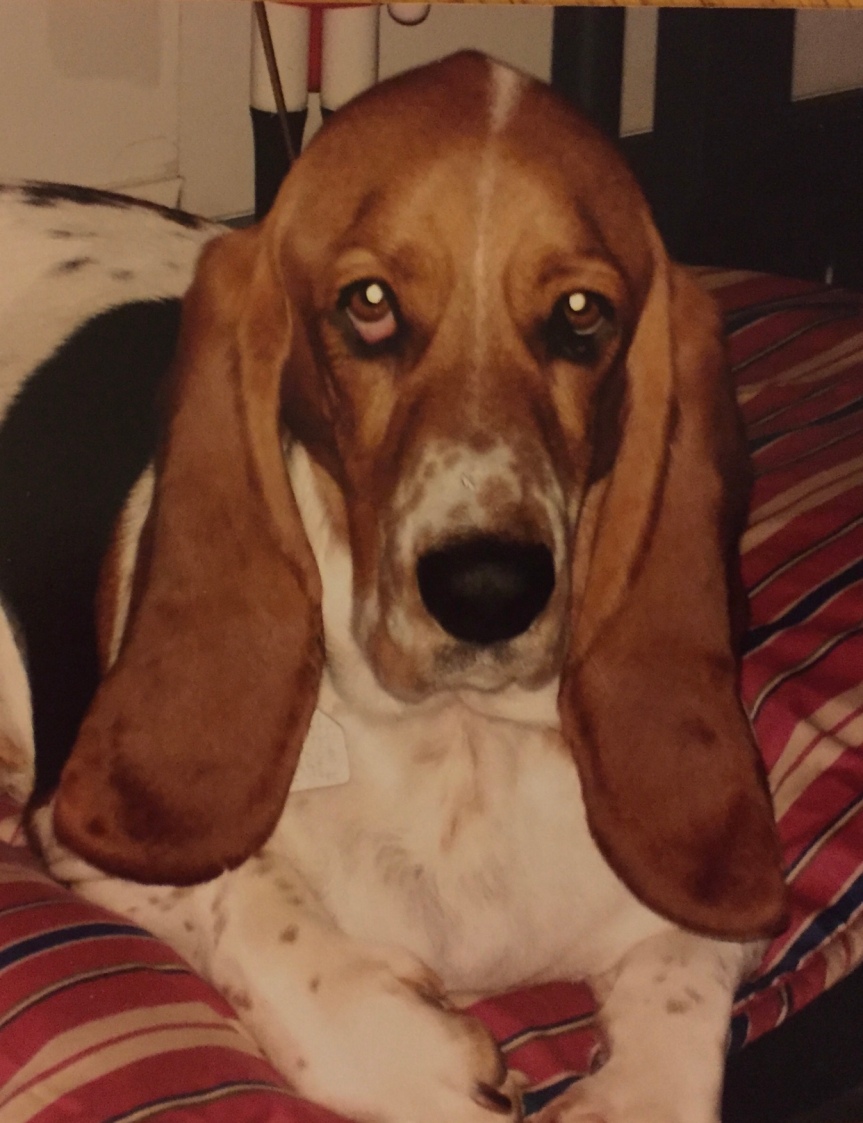 Because of the multi coloring on her fur which looked like large patches we appropriately named her Patches.  She was an adorable puppy but about the most annoying dog you have ever seen.  She had the most mournful, sad, braying howl that you have ever heard.  I think we were in puppy hell for about three years.  I thought the puppy stage would never end.  But it did.  She mellowed out, she slowed down, she had a lot of health issues. But I think it made us love her all the more.

The first thing was a cherry eye.  this happened before she turned six months old.  A huge red ulcer popped out under her eye.  I thought it was because she had strained too hard on her leash.  I took her to the vet and they told me she had a cherry eye.  Basset hounds were pre disposed to them. It was time for her to be spayed so we had the cherry eye removed at the same time.

Throughout the years she developed several cancerous ulcers in her mouth.  Especially in the front of her gums.  We had them removed time after time.  It got to a point where she almost didn’t have front bottom teeth because she had had so many tumors removed.   She was such a needy girl.  She wanted me with her constantly.  She would sit and stare at me adoringly.  She was a big girl yet she liked to get on my lap and lay her head on my shoulder and gaze at me while her legs hung off of the bottom of the chair. 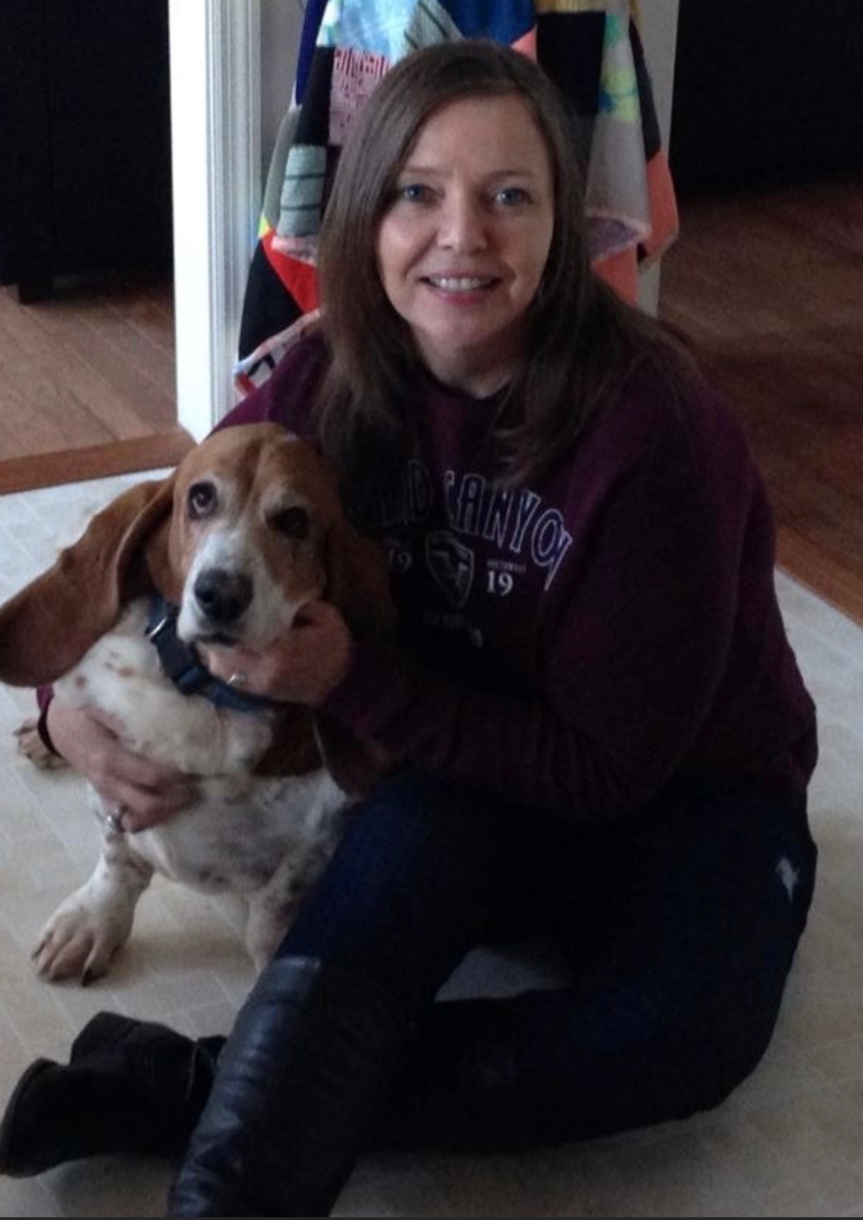 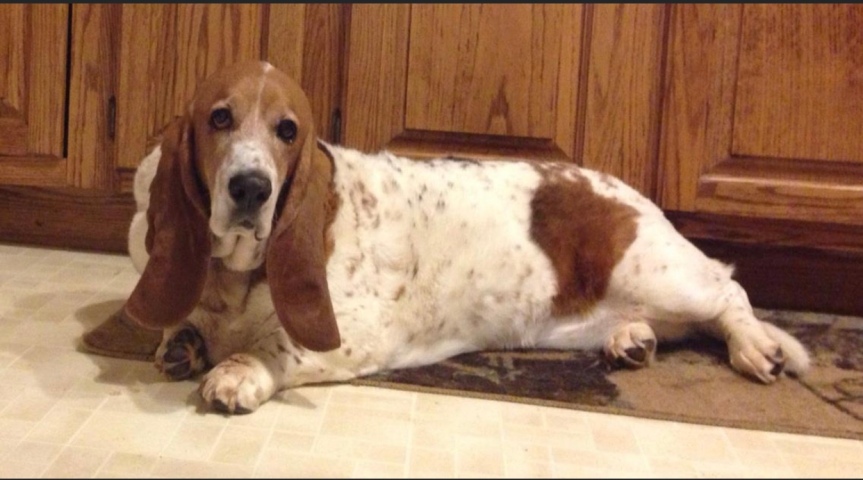 One day she ate a rock and was so sick I thought we were going to lose her. We didn’t know what was going on.  She passed the rock and the vet couldn’t believe it hadn’t done damage to her insides it was so large. She would eat anything!!!  I had to constantly watch her even after she got older.  She ate moles!!  My outside dog would dig them up and then Patches would grab them and chew them up before I could even get them out of her mouth. 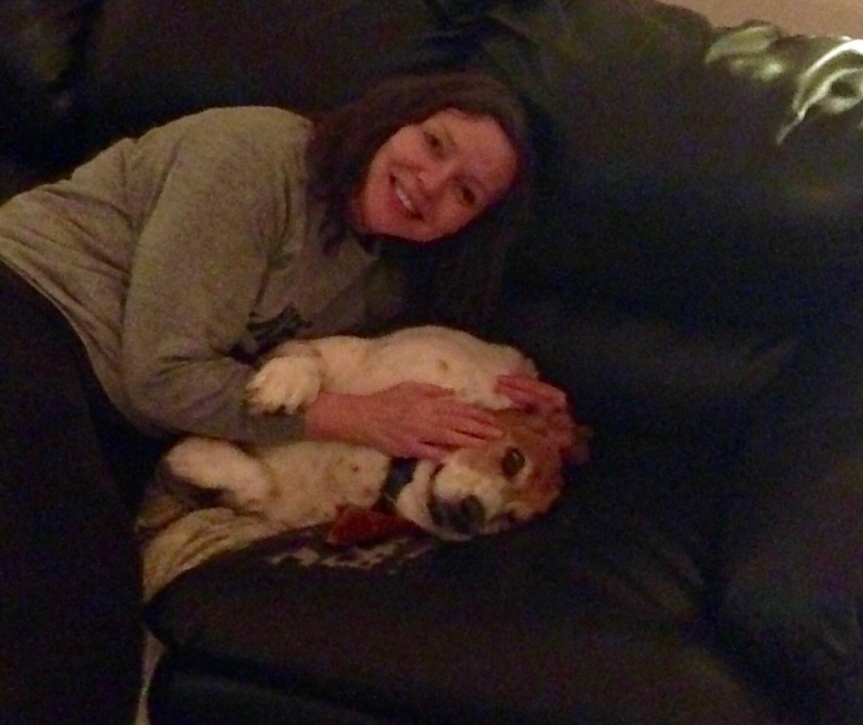 In the spring of 2015 I noticed a lump on Patches’ neck. We took her to the vet and was told it was just a fatty tumor and nothing to worry about.  It was about the size of an egg. We didn’t think anymore about it but a month or so later I noticed it looked like the lump had gotten larger.  When I felt it I panicked. It was larger, it was the size of a softball.  I took her to a different vet.  This one told me that it was not a fatty tumor it was a malignant tumor.  There was no way to remove it because it was so deep there wouldn’t be enough skin to cover the wound.   We had an option to take her for chemo and radiation. They were not sure that this would do much more than just shrink the tumor and not completely get rid of the cancer. Patches was almost eleven years old.  We would have to leave her for long periods of time at the vet clinic almost 50 miles from us to have the treatments.  She had separation anxiety so bad, whenever I had left her in the past, that I had to give her valium and she usually developed a terrible case of diarrhea and had to be put on medication for it.  We decided not to put her through that.  We would love her and care for her as long as we could. 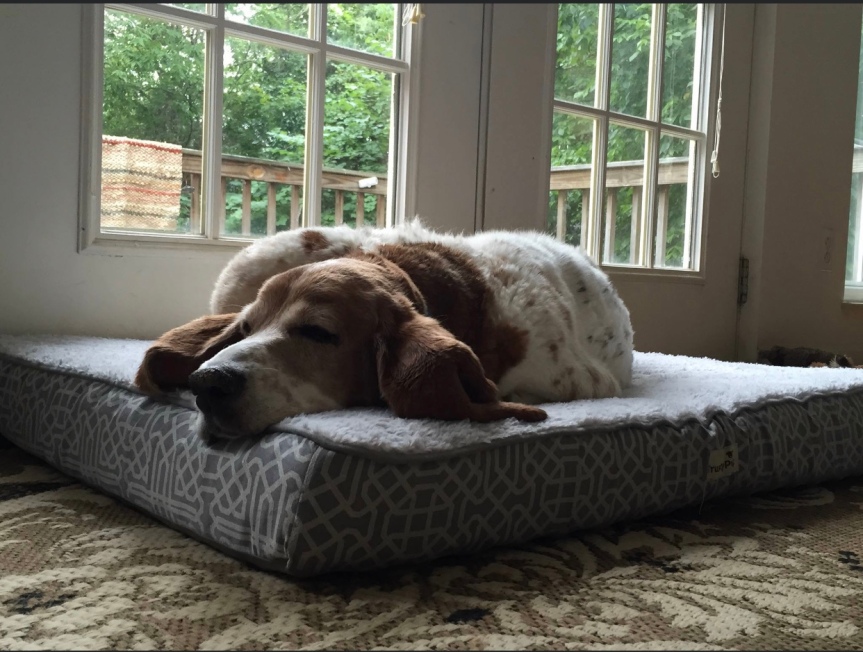 The “As long as we could” turned out to be almost a year.  For the most part she was fine she still got around really well.  She just had this huge tumor on the side of her neck and it was getting bigger.  She still liked to play but as the tumor got larger she had a hard time running.  She started to slow down. We had her monitored at the vet regularly.  They told us there was a chance that the tumor would get so large it would burst.  When this happened she would die almost immediately.  I couldn’t imagine this happening to my poor girl.

In late February on a Friday we called the vet and told them we thought it was time to let Patches go.  Anything after that we felt was just being selfish for us and not thinking about her.  We had to wait until the following Monday.  I spent the entire weekend loving on her but my heart breaking at the same time knowing what was coming.  She was uncomfortable by this time and didn’t get around a lot.  We spent the weekend mostly outside, which she loved, on a blanket in the back yard.  It was unusually warm for the end of February and sunny.  We laid in the sun and shared our last hours together. 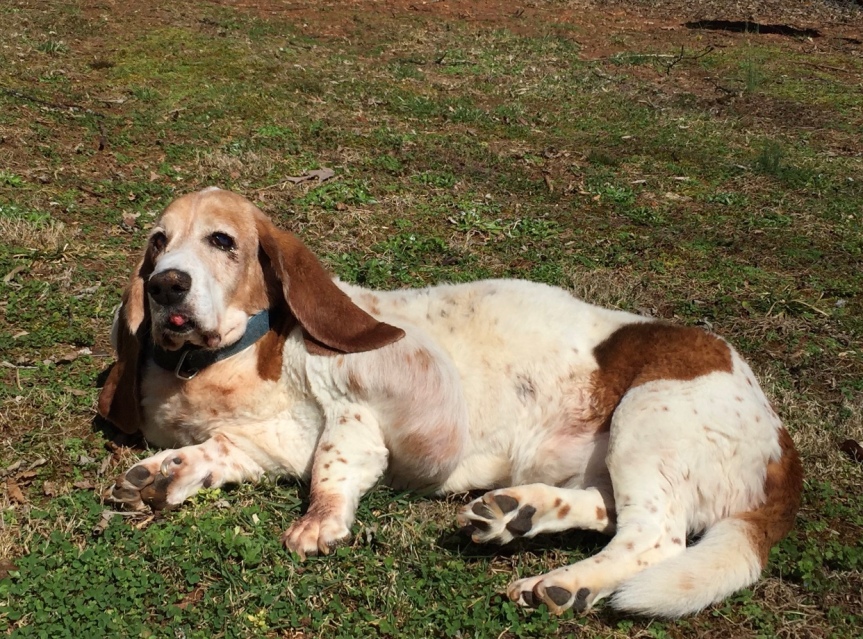 I don’t think you can see it but the tumor was on her right side.  She is lying on it so you can’t tell how large it is. 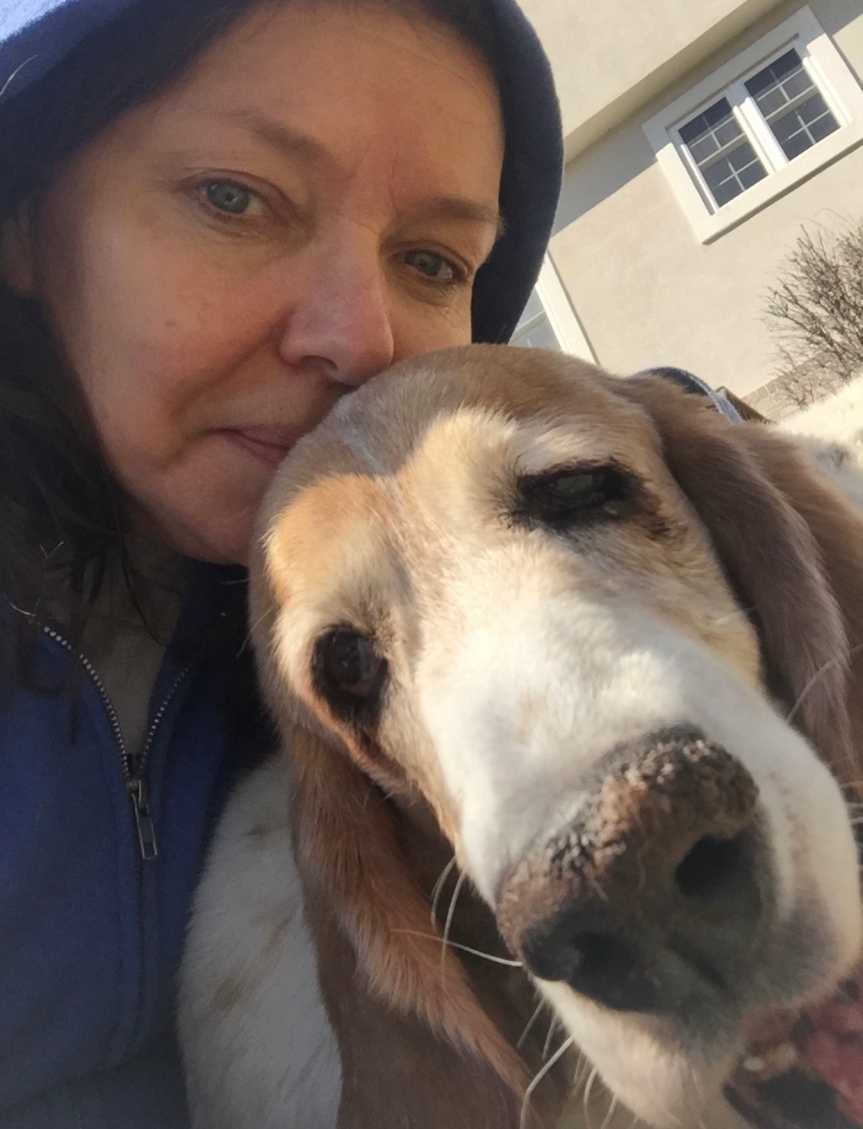 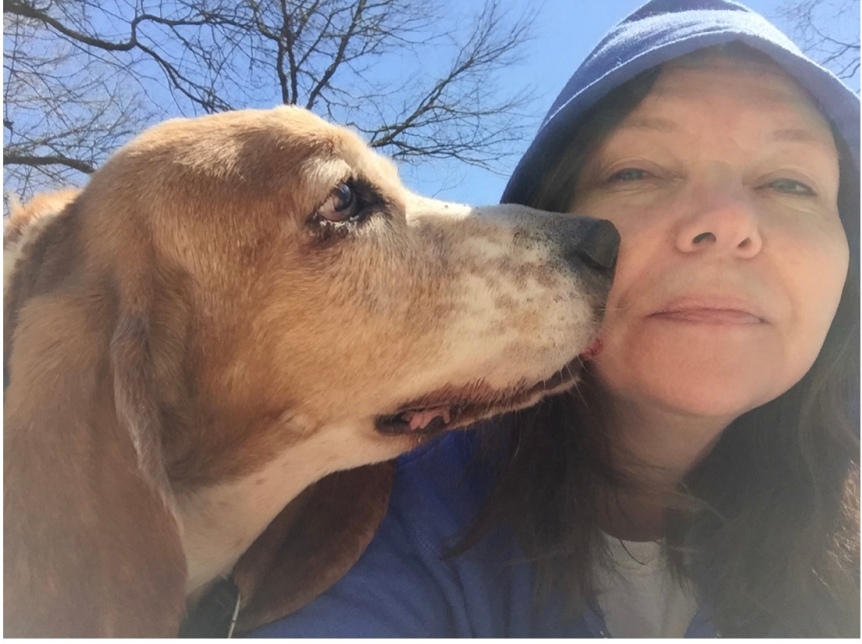 On Monday Mark suggested that I stay behind and he and my father in law would take Patches to the vet for the last time. He thought this might be easier for me.  I had always been with my other fur babies in the past when this time came and it was always terrible.  I knew it would be even worse with Patches.  I agreed.  I would stay home.  But when It came time, I couldn’t.  I had to be with my girl to the very end.  She depended on me for everything.  I would see her through this.

We took the short ride to the vet.  They would give her a shot to put her into a sleep and then administer another shot to stop her heart.  Mark became so emotional he had to leave the room a couple of times.   I stood right there holding her in my arms and whispering in her ear that I would see her again soon.  It was February 29th, Leap Year.  I thought it was fitting because she was always such an unusual baby.

As they say hindsight is 20-20 and when I look back on it I wish we had had the tumor checked out by a second vet when it was no bigger than an egg.  Maybe then it could have been removed.  I think of ways it could have been different.

When thinking of a name for my blog I decided to name it after my sweet baby Patches. I will never forget her and she lives on everyday in my heart.  And being the southerner through and through that I am the southern part was not hard to figure out. So Southern Patches became the name of my blog.

Today is Patches’ Birthday, December 5th.  Happy Birthday to my sweet Patches.  I will always love you. I will never forget you.

If you have made it this far thank you for reading. 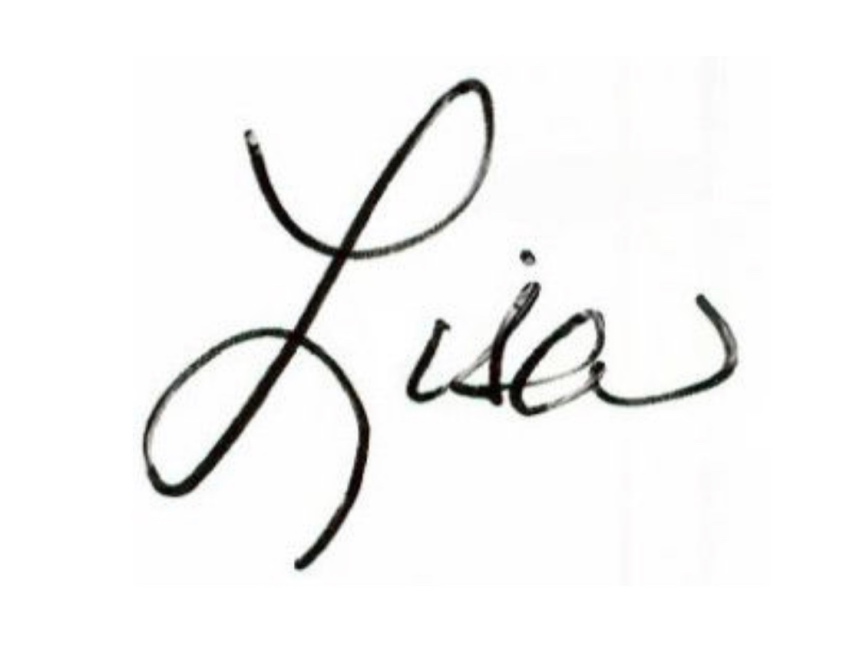 6 thoughts on “How My Blog Got The Name Southern Patches”

Blueberry muffins on a Saturday morning. ❤️ Happy Saturday
Happy Friday. I love the freshly mowed fields near my house. I have taken pictures of this area before but it always seems to look a little different.
Good morning from East Tennessee have a wonderful fun day!!
The girls have some serous Cattitude going on. Sadie, Allie and Izzy. MEOW!!!🐈‍⬛❤️❤️❤️
The Blackberries are blooming and right on schedule the temps are cooler this weekend. BlackBerry Winter. Well here in East Tennessee anyway. ❤️❤️
And now the rhododendron are blooming. I love them!!!!!
Loading Comments...
%d bloggers like this: